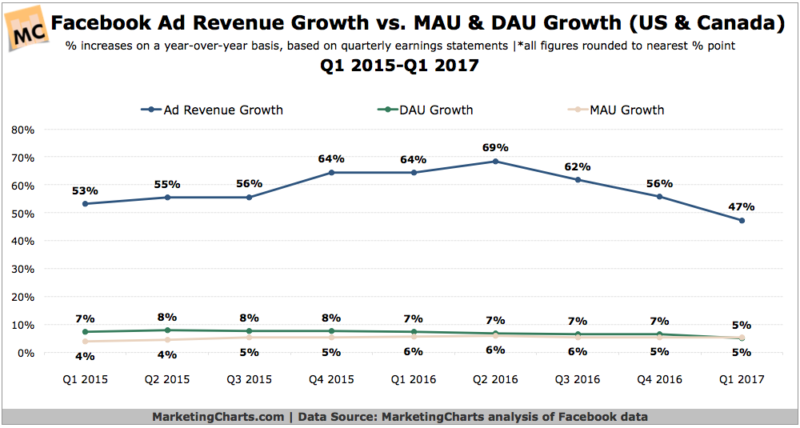 Why would Silver Beacon keep touting Snapchat as a marketing channel when the news was full of the company missing estimates?

Ah, so glad that our newsletter friends asked. Financial markets always overhyped the company.  “Snapchat Stumbles” was the headline of its first-ever earnings call. The company missed its consensus user and revenue goalsduring Q1. But your organization should care because Snapchat has 166 million daily active users and 63% are younger than 35. Snapchat is making 90 cents per user. The company has been working on a self-serve ad platform this year. That service just launched, but this is not a place for neophytes. Advertising created by people who are unfamiliar with Snap-style will waste money on ads.

Facebook suffered a similar setback shortly after it went public in 2012. The company righted itself, however, and continues growing as the above chart shows. As Marketing Chart’s superb analysis points out, Facebook’s US ad revenue consistently expanded 10 times faster than its audience growth. Facebook’s revenue per user is $4.23 worldwide and pushed close to $20 per user in the US at the end of last year.

The most impressive number is that Facebook controls 5% of global advertising spending.

We told you in March that Google’s Trusted Stores program was ending. In its place is Google’s Verified Customer Reviews program. You’ve undoubtedly already seen that Google reduces its liability because  this switch means that consumers, not Google, are the ones vouching for the business. The program’s terms call for 150 reviews before a badge can be earned. There is also a function to link your company’s reviews to your Google ads–a tactic that Google says can increase the click rate “up to 10%”.

Google is also testing a feature that shows how many businesses are advertising for specific home services businesses. The news comes via The SEM Post which also published screenshots of ads in California showing plumbing and locksmith services displays that include the notation “20+ [businesses] serving [city].”

This is a big test for Google because it can cause people to look at more ads. We know from analysis that overall ad revenue rises when more competitors enter a market, even if click costs per advertiser decrease. Google has always made its fortunes on nickels and dimes. This is potentially a scaled-up version of that idea.

You Should Know This:  The best article we’ve found about Friday’s cyberattack is “The massive, worldwide ransomware attack was stopped by a researcher ‘accidentally‘” published in Saturday’s Recode. It’s even written in English instead of tech. Reading time: a short 1 minute, 40 seconds.