Google flags website pages without encryption as “NOT SECURE” when they are visited using the Chrome browser and have a password or credit card field. Google announced Thursday that they will expand the program and call any unencrypted site that requires data to be entered as not secure. All sites visited in Chrome’s incognito mode will also be marked as not secure. Those two changes take effect in October.

Google also began testing an option for consumers to send a text message to advertising home services businesses according to an article in The SEM Post. Their testing and ours showed that the service was not available on computers. That makes sense–you’ll text a business from your mobile device, not your computer. 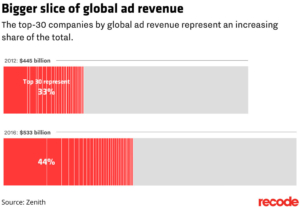 Facebook is using a lot of that advertising money to hire 3,000 new employees to monitor Facebook Live videos for violent content. Since making live video available to all users, Facebook has dealt with people streaming suicides, rapes, and murder. Our back of the envelope calculations put the cost of this initiative at an extra $200 million annually.

Organizations that use fake profiles to manage their online Facebook page may also run afoul of the company’s attempts to keep hoaxes and propaganda off the site. Facebook made its Information Operations handbook public this week and “fake profiles” are one of the company’s big targets. We’re big fans of Facebook’s Business Manager, which lets people use their personal logins without mixing their personal accounts with the organization account.

Of course, many on social media seemed to care more about a red swim suit this week than others. Sue explained it all to George who was flabbergasted that Sunny Co Clothing would would give EVERYONE a swim suit if they reposted a photo and tagged Sunny Co. Here’s the suit. 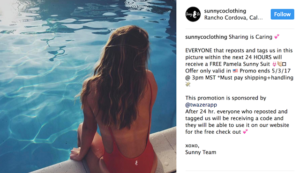 This sort of thing was a bad idea 10 years ago because people would simply repost the image for the free suit, then delete the image, and stop following the company. Given that Instagram now has 700 million members, the idea was terrible. But here’s the rest of the story via The Arizona Republic: the creative and execution were bad because the company is run by two University of Arizona seniors. They’re only honoring the first 50,000 reposts which could mean future problems for the startup. Giveaways, online contests, and sweepstakes are hard to do online if you don’t have training or support.

We also learned about the data behind this week’s other social media viral piece: the video of talk show host Jimmy Kimmel telling the story of his baby’s birth and immediate heart emergency. Newsletter publisher Axios reported Wednesday that Kimmel’s Facebook post jumped from 1 million views to 14 million views, his Instagram posts doubled and his Twitter post was retweeted 26,000 times instead of the more typical “couple hundred”. Oh, and the video on YouTube was watched 7 million times in the first day. Your lesson here: no one–not even those who go viral more than once–has a secret recipe for going viral. You just ride the wave if you’re lucky enough to have it happen to you.

The best thing that we read all week–maybe in many weeks–is “Why You Really Need to Stop Using Public Wi-Fi” in the May 3 issue of the Harvard Business Review. It’s written for anyone to understand and is a four minute read.