10 Second Takeaway: A former employees says that Snapchat CEO Evan Spiegel made derogatory comments about people in Spain and India, Also Google and Burger King got into a predator-prey game that BK wins. And we have a fun look back at what popular websites looked like years ago.

These ads won’t activate Google Home any more so feel free to watch.

Great social media and device marketing is coming out of the fast food world. A Burger King ad took its turn this week with a spot that activated Google Home devices.

Consumers began changing the ingredient list on the Wikipedia page about the Whopper so that Google read that the sandwich contained cyanide and children. Google stopped the campaign from working entirely, but Burger King immediately released a second spot with a changed voice and had more queued up.

Our Take:  The campaign was benign, clever, and a good story. We believe that Burger King wanted publicity not sales.

The best argument against the campaign came from George’s youngest son who said that the stunt added a search for the Whopper to people’s search histories and that could change their search results. And he’s right although the effect would be minor and temporary unless you often search for fast food. George has been insufferably happy that his children can describe SEO effects.

Snap Inc CEO Evan Spiegel is a young self-made billionaire with a very big spotlight caused by the company’s IPO. That spotlight includes something all business leaders can understand–a former employee filing suit.

The news that rocked the online world this week was the revelation that Mr. Spiegel allegedly badmouthed Spain and India as markets and according to a newly public court filing said, “This app is only for rich people. I don’t want to expand into poor countries like India and Spain.”

Snap denies that the comment was made, and we would be remiss if we didn’t add that anyone can be accused of saying anything, but we also know that Snap is receiving a lot of consumer anger in India over the allegations.

Snapchat is also the latest Internet company promising to link online activity at their site to retail activity at your location. The folks at Marketing Land did a fantastic job listing all the caveats. The biggest is that Snap-to-Store only works if the user interacts with Snapchat in your store. There are others, and they appear to be more restrictive than other advertising companies.

Our Take: This is only a contested allegation, but it came at a bad time for Snap which will announce earnings on May 10 for the first time since its IPO. An underwhelming review in the trade press stings. A comment insulting 18% of the world’s population could be catastrophic if it is proven or even corroborated. 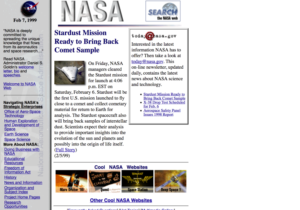 Journey Back in Time to Your Favorite Websites

This look at NASA’s website from 1999 is one of the delightful comparisons put together by Leszek Zawadzki, a marketer based in Poland.

Lesek used Amazon’s Way Back Machine to put together pages from websites over the years to show changes in user experience and design.

You can view all the pages at his article in Startup Grind.