We wrote last week that Amazon was eyeing an acquisition. Instead, look for Shipping with Amazon to launch and reduce the company’s reliance on the USPS, FedEx, and UPS. Amazon spent about $50 billion on shipping over the last three years so this move has leverage.

This move also has precedence. Amazon Web Services, the company’s cloud business, now accounts for more than 60% of Amazon’s operating income. Amazon launched the service in 2004 to resell the Internet hosting services it developed for its own use. Delivery could be a similar success.

Jeff Bezos’ mantra of “get big fast” is almost surreal in the company’s execution. Amazon delivery is only one example. Amazon announced its Whole Foods acquisition less than 250 days ago. Since then, they’ve also:

Visit an unencrypted web page using Google Chrome beginning in July, and your browser will show that the page is “not secure”. That’s true today for e-commerce pages. But starting in July, Google will flag every page without encryption just as they’ve been warning that they would do.

Google is also requiring ticket resellers to be certified and declare the face value of the ticket. The other kind of tickets–airline tickets–along with hotels and other travel services are getting a redesign. Travel info firm Skift says: “Google is one step closer to its user-centric vision of travel booking,”  Translation: Google wants to sell more travel, not travel advertising.

And hallelujah, word came from Lifehacker Thursday afternoon on Twitter that Google Chrome now has a “mute site” instead of a “mute tab” button. That means that the site’s audio will NOT play when you’ve selected that option. And your browser stores your choice so you only set it once per site.

To mute a website while using Google Chrome: hover over the tab at the top of the browser page, press right-click once, and scroll down. Silence is that easy!

Facebook is adamant that this is to downvote comments only. The fabled thumbs-down dislike button still does not exist.

If you haven’t seen the downvote link yet, you’ve probably seen a post from one of your Facebook friends asking you to comment on their post because Facebook has limited the newsfeed to 26 people. It’s a hoax that got new life when a version appeared that read, “I checked Snopes and…”  Read Snopes calling foul on the whole thing.

It’s over now, but The Washington Post captured the collision of SEO and Philadelphia Eagles fandom. Google’s quest to “organize the world’s information” sometimes goes astray. Sometimes it is deliberately led astray. For a brief time, Eagles quarterback Nick Foles was the answer to the search query, “who owns the New England Patriots” in a nod to Philadelphia’s Super Bowl win. 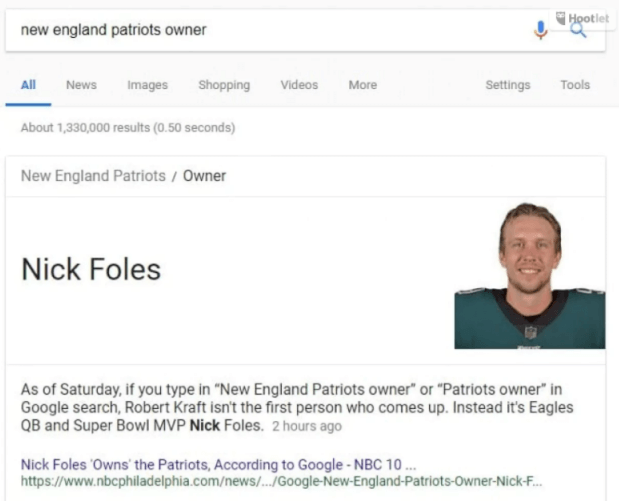 Get your own free copy of Spotlight in your email every Monday at 6 a.m.