Living in a Science Fiction World

Today’s Spotlight takes about 4 minutes to read.  There are also video links to another 10 minutes of video.

Questions or comments as you read this week’s Spotlight?  Write George

And it would be great if you encouraged your colleagues to get their own copy. They can do that at this link.

Congressional Democrats released 3,500 ads that were purchased by a Russian company over a two year period. We’ve looked through many and read many analyses. The key points:

Hint:  Don’t get caught up in the money spent or even the impression count that describes the number of times something was displayed. Every ad you see or hear in any media counts as an impression. We don’t know the real impact yet of the 25 million times that the racially divisive ads were seen.

What this means for the future

We told you last week about Facebook’s new political ad authorization process. The process works, but the execution of new ads was glitchy this weekend. Google is launching the same type of program as Facebook approves the first agencies to place political and issue advertising and hopefully things will run smoothly when after a few more days.

We’re pretty sure we can advertise toast, but it can’t be buttered and can only be made from white bread, not whole wheat. 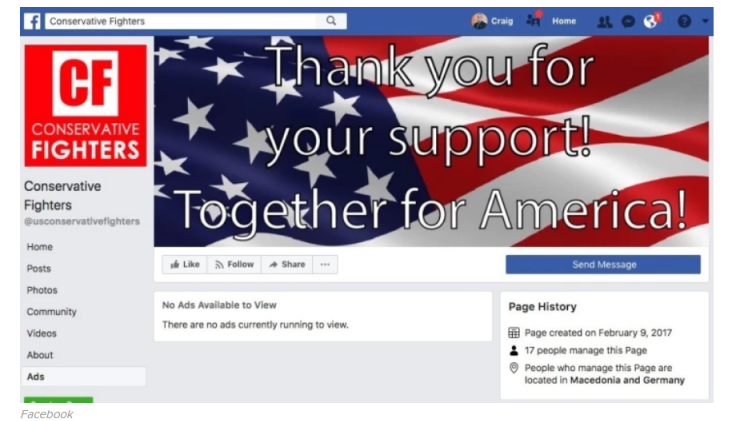 Why this is Important

The issues surrounding online political advertising are summarized in a fantastic BuzzFeed News piece. They found that they could access an unreleased Facebook tool that shows where a Facebook page’s managers are based.

The page above that shows an American flag and is titled “Conservative Fighters” is managed by 17 people who live in Macedonia and Germany.

There are plenty of other pages, not ads but pages, that are run from overseas locations. Some mention political candidates or the president.  That’s a problem that won’t be fixed by a political ad authorization process. Read the article here.

“We are living in a science fiction world,” my wife Joan told me. She’s right, and it’s not just Atlas.

Google made people gasp this week with these phone calls that Google boss Sundar Pichai played at a developer’s conference.

One big issue: the human-like non verbal comments such as the “umms” and the other vocal tics. Another big issue: the automated assistant doesn’t introduce itself as a machine. We’re in uncharted territory–the science fiction world my wife mentioned. Our laws, ethics, and education don’t address these issues yet.

Even as Google introduced this amazing technology and former Google company Boston Dynamics showed its robotics tricks, Google made a pitch to make tech less addictive. The initiative is called “Digital Wellbeing”.

Three features in the rollout:

1. Turning your phone screen side down will activate “Shush” and silence calls and notifications.

2. “Wind Down” activates color filters on your phone during the times you set so that looking at your phone doesn’t disturb your sleep cycle.

3. And you can see how much time you spend on different apps on your phone with “Dashboard View”. You can even set the system to alert you if you’ve used your phone longer than you planned overall or in certain apps.

Facebook is rolling out new fundraising functions for non profits. If you work at a nonprofit org, you need to be putting them on your Facebook page.

Media company Gannett has purchased a leading Google advertising agency that also created its own software. Could they be positioning to supplement newspaper advertising online?

Amazon has stopped purchasing Google shopping ads. That’s good for retailers who won’t have as much price competition. Amazon is one of the few companies who could stop advertising on Google and remain okay.

The Equifax data breach was catastrophic for data privacy. We got a look this week at the impact when Equifax filed a report with the SEC.

The final numbers include 146.6 million US consumer names and dates of birth with almost that many social security numbers. The whole report is two pages and worth your time.