Good Monday morning. It’s June 4th. There is a major Apple product announcement today at 1 p.m ET. Analysts expect the company to announce the latest system upgrade and new tools built into its phones that will help people monitor and potentially curb their usage.

A European Union data privacy rule that took effect May 25 caused all of those “Our data privacy rules have changed” notices you saw over the last few weeks. The rules are among the most stringent ever and create new requirements for any online entity regardless of where they’re located. The General Data Privacy Regulation, known by the acronym GDPR, even address information that doesn’t identify a person by name.

A company like Securus couldn’t exist in a GDPR world. Media reports have focused on the little known data company that can track “any phone within seconds using data from AT&T, Verizon, T-Mobile and Sprint,” according to a ZD Net report. That’s pretty explicit information, and there have been abuses of that private data. Even worse, that company has been hacked at least once. Brian Krebs, one of the best security reporters on the planet, has written a must-read story called “Why is Your Location Data No Longer Private?”

Krebs ties the whole thing to the death of net neutrality’s consumer protection rules. That deadline has shifted several times and is now set for next Monday. The California State Senate passed a bill that is expected to become law that requires companies to adhere to net neutrality protections or be ineligible for California state contracts. And like the EU used GDPR to protect its citizens everywhere, California’s rules are expected to apply to its citizens as well.

Meanwhile, the ACLU is targeting a face-recognition program made by Amazon’s web services division called “Rekognition”. The ACLU claims that law enforcement agencies in at least two states are using the program to conduct surveillance. Other uses include finding lost children in crowds or providing security for high-profile events.

This was probably not the best month for Google to remove its “don’t be evil” motto from most of its websites. 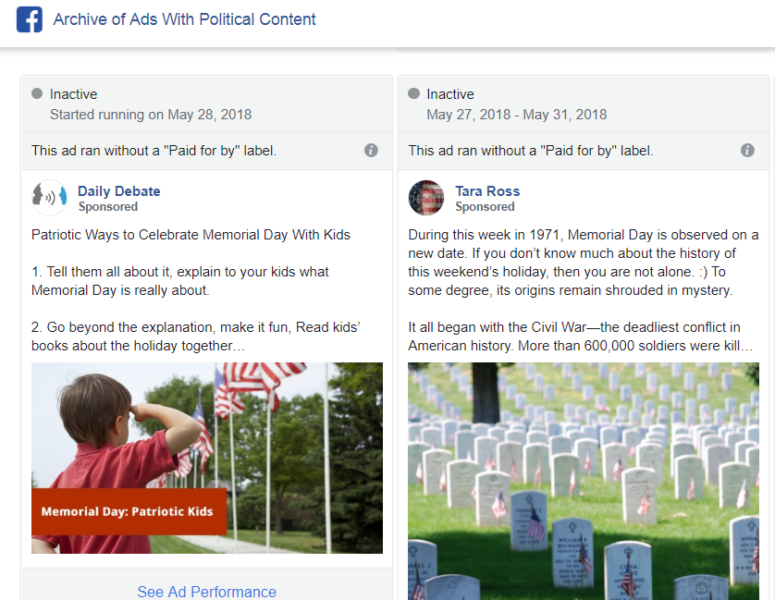 Anyone can now search a Facebook archive of political or sensitive issue ads by company name or subject matter. The two ads shown above are part of the archive which grows more every day. Visitors can see the ad and which ages, locations, and genders were targeted and how those ads performed.

Search the archive at this link

Facebook also announced Friday that it was eliminating its Trending News feature and will instead show news items from Fox and CNN. Look for that feature change this week as Facebook rushes to slap a fresh coat of paint on the website.

Google’s “Speed” update, ranking websites based on how fast they render to end users, launches in July. Google is serious about website speed. We’ve been telling you about this initiative for years. They’re only going to be more focused as devices rely on public wifi and other slower systems.

The most important thing to note is that Google Analytics now reports on actual user experiences regarding speed. The speed data in their reports shows how fast your users load a page regardless of the technology they are using. Google will not base rankings on how fast its programs can access your website, but how fast your users do. The difference sounds subtle but is significant. Sue and I have spent most of the last year getting daily reports on site speeds for some sites. It’s not because we thought the reading was great.

Google will also start reporting on websites that are unencrypted in its Chrome browser. The previous standard was to show that a website was “secure”. The company will now report on an “insecure” website as it assumes that all are following the best practice of encrypting the entire site.

Also coming fast is Google’s “mobile-first” update. Google has already notified us that they will be using pages in the index based on how those pages appear on mobile devices in some sites we own and manage. This initiative affects consumers, businesses, and even government sites.

Finally, watch for a Google Chrome option this summer that will allow you to use facial recognition instead of passwords to access sites.

Mary Meeker is one of the most prominent and influential Internet analysts ever. Her annual report each summer is considered a milestone moment. There is always some grumbling that it has become more event than milestone, but it is required reading in the industry.

Here is a link to the 294 slide presentation.

We read it a couple of times so that you don’t have to. Our 10 takeaways:

1. The Internet growth rate has slowed as the cycle matured.
2. More than half of the world’s population is now online.
3. U.S. adults are averaging about 6 hours a day online.
4. More than half of that time is on mobile devices.
5. Voice interfaces are exploding with 30 million Amazon Echos installed.
6. Amazon (and Apple) are growing their search business to compete with Google and Facebook.
7. Google is growing its delivery business to compete against Amazon.
8. China is home to several companies that could become as ubiquitous as Google and Facebook.
9. Internet companies are spending hundreds of millions on R&D.
10. Voice and machine learning are now at human accuracy levels for voice detection.