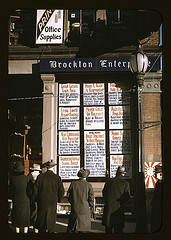 Early news distribution – post it in the window, not in Windows, and make them leave to see our words.  Image by The Library of Congress via Flickr.

There will always be a place for double sourced stories, good editing and original feature articles.  As the U.S. is quickly learning, however, those elements may be served in a different distribution method.

In our DC hometown, The Washington Post remains the paper of record and an institution.   Even as long-term staffers take buyout packages and make way for editorial sharing with other papers, we are fortunate to have an amazing hometown paper.

There may not be a better one-two editorial columnist punch in America than Dana Milbank exposing the man pulling the levers behind the curtain and David Broder explaining why the levers were being pulled.  Our sports columnists are Sally Jenkins, Michael Wilbon and Tom Boswell with Kornheiser and Feinstein showing up every so often.  The catty Lisa de Moraes exposes why television is called the boob tube, and Metro’s reporting reporting remains solid.

But WPO, as they’re called in financial circles, is less a newspaper or media company and more a content conglomerate.  Tutoring mill Kaplan accounts for a massive share of the company’s financial growth according to its 10-K filing with the SEC last month.

A tiny paid circulation chart on page 13 tells the story.  In 2006, there were 681,510 subscribers.    In just two years, circulation has fallen 6% and shows no signs of ever regaining its lost customers.

The Tuscon Citizen ran its last issue this weekend.  Papers in Denver, Detroit and other cities go online or cease operation.   Just as millenials continue to eschew wired telephone service in their homes, the U.S. information-seeking population continues fragmenting, seeking news fast via blogs, Twitter or even cable news.

Yet word on Ad Age’s site yesterday was that the mainstream media wants the world’s search engines, especially Google, to deliver mainstream media results higher than “parasites off the true producers of content”.    An ESPN exec reportedly drove the issue at a meeting of the Google’s Publishers Advisory Council. Quoting SEO guru Lisa Barone at Outspoken Media, “They knew that a Publisher’s Advisory Council even existed. Did you know?”

Even now, when streaming cable television offers multiple news channels, finding an actual newscast at an off-peak hour during prime time is impossible. The Internet provides news seekers with the ability to create their own news supplier, likely a cluster of sources each reporting on different issues.   Media outlets who insist that those news seekers use their form of distribution will soon join typewriter ribbon suppliers and telegraph repairmen on the sidelines of technology history.

I heard the rallying cry in the mid 1980s when media was told to get online.  For the most part, they laughed at the geeks sitting in front of monochromatic screens and communicating with someone in another city, much like people wondered why anyone would ever need a private telephone line. Yet the biggest source I’ve found of anyone bemoaning the slow death of print and live broadcast is mainstream media.

The public may not know what is best for its information gathering need, but the public must assuredly knows what it wants. Google spent billions figuring out how to track what the public wants and became ubiquitous.  Surely international conglomerates can figure out how to make their stories appear before this opinion piece if small upstart companies can do so.