Good morning. It’s Monday, April 16th. This is Spotlight #250. Tax Day is Tuesday. You think you have a busy season? The IRS is expecting 32 million tax returns between this week and last week. More than 85% are expected to be filed electronically.

Facebook Testimony Week is over. The company was never held to account the way industry insiders expected. We have some fresh data for you from some polling we did.

After hearing and reading a lot of Facebook news, we asked its users to comment on their perceptions of the issue. There isn’t enough data for us to give high quality percentages on answers, but its fair to say that the people we asked overwhelmingly thought that Facebook operated within the law. To paraphrase Dickens, they also think the law is an ass and that their personal info is being handled in an unethical way.

We cared most about reader answer to this complex question:  Briefly describe the Cambridge Analytica / Facebook scandal.

Many correctly noted that the data policy had changed over time. Many also correctly said that Cambridge took advantage of their Facebook app agreement. 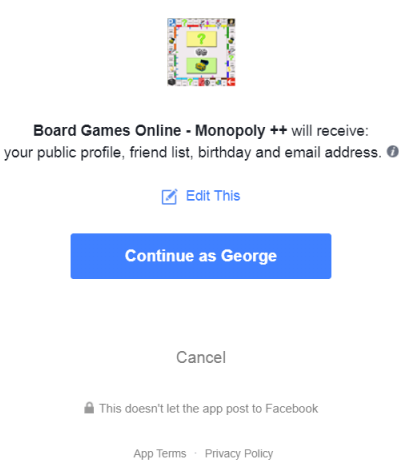 But there was a lot of focus on the fact that Cambridge is not a U.S. company and a huge percentage that said Facebook sold the data or allowed access to it without user permission. Many of those believed that the 2016 presidential election was influenced, giving credence to the intelligence community theory about Russian government involvement.

Almost all of the Facebook data was obtained when users gave apps, websites, or social media sites like Facebook permission to mine their data. And that’s the issue: people freely volunteered everything. Canceling your account now doesn’t mean that the company has to remove your data unless that’s in their agreement.

Have a look at this Facebook permission screen from an app this weekend.

Most of us think that this agreement is how data is captured. And a lot of it is captured that way. This is not an official Monopoly app, and it’s not played on a phone, but on Facebook itself. The company will tell you that they want your birthday to give you in-game rewards on your special day and that they want your friends list so that you can invite them to play.

But it’s not just game apps looking for data. 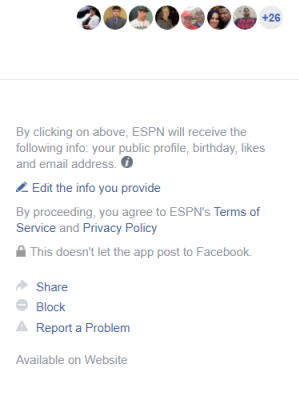 To the right is a screen from an official ESPN app Note the images above. The app is using social proof to show me that 33 of my friends have already done this.

And this app wants even more information. In addition to my public profile, Disney-owned ESPN explicitly says that they want a list of all the things I like on Facebook–not just those that are sports-related. And they want my email address.

The moment that I agree to that, I’ve become the entity giving away my data. It’s not ESPN’s fault. It’s certainly not Facebook’s fault. If I don’t want this information out, then I don’t have to get my sports news from the ESPN app.

Technology scientist Jaron Lanier, one of the fathers of Virtual Reality and a prodigy who entered college at the age of 13 said last week in a  well-received TED Talk,

“We cannot have a society in which, if two people wish to communicate, the only way that can happen is if it’s financed by a third person who wishes to manipulate them.”

But we do have that society. And hopefully with a little more light on the issue, you can make informed choices that best fit your desires.

Facebook isn’t alone in the hot seat. Uber has agreed to an FTC data privacy audit proposal after it failed to disclose a breach in a timely manner. And a coalition of 20 consumer groups has accused YouTube of violating federal law regulating data collection from children under the age of 13. The groups are asking the FTC to intervene. YouTube has countered by saying that the site’s rules require that users be at least 13 years old to access the site.

Google’s Gmail desktop app is getting a big makeover, including a cool new font and the ability to block others from copying or forwarding your email. Google is also introducing the same kind of suggested replies that are currently featured on its Android app.

Google also switched search results delivered on mobile devices to one long continuous page with a “Show More Results” button instead of reloading the page. That’s the same kind of design that sites like Pinterest and Facebook use.

Conveying information in a memorable, visual way is something that we all strive to accomplish. Italian designer Emanuele Abrate did that in a great way by showing the logos of famous companies with the font name replacing the company name.

Here’s YouTube. See the rest of the display called “Logofonts”