The short version is that Target made a change in its stores to remove gender labeling from toys. Some people thought there might be an overabdundance of political correctness and took to social media to voice their complaints.

Then they were answered by Mike Melgaard.

Mike doesn’t work for Target, but he created a simple user id with a Target logo and the name “Ask ForHelp”. Note that there is no space between the second and third words. Just Ask ForHelp. I missed it the first time.

Mike wrote many responses to many people angry about this change. None of the responses were especially nice. Many were funny because they tapped a nerve called “If we could only tell ranting customers the way it’s going to be” and those responses were shared all over the Internet. AdAge was especially in tune with the story, jumping on the news early and following through the developments when Target deactivated the account and then sent a bit of a coded love letter to Melgaard via its own page.

Mainstream media blew this story. The Today Show went so far as to publish that Target was unhappy. Seirously. They wrote this: “Target has pulled all of the related posts from its page, and isn’t happy with Melgaard’s antics.”

Because a geek defusing a social media hailstorm with humor always displeases leaders.

Make no mistake. Target loved  Melgaard’s assault on the vocal minority. He knocked out at least a week’s worth of someone’s time, and grew an Internet audience of thousands who applauded his actions and undoubtedly dissuaded other complaints from reaching Target. They disabled his account because you can’t knowingly have people insulting strident customers. But you can be certain that they embraced the attention that the people following the story were giving their decision.

This little coded image and copy appeared on Target’s site the next day. 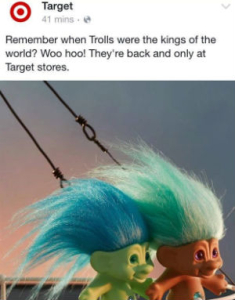 Target gets that this was a special situation. Target gets that the social media skirmish was overwhelmingly in favor of their new policy. So they published a picture of trolls with a nice message. It told Melgaard everything he needed to know: all is forgiven, and hey, thanks.

Had a tone-deaf Target manager or attorney truly been upset and stomped on Melgaard’s phony comments, the backlash would have consumed the company. Instead, they showed a cheeky side to their corporate selves and stayed out of trouble. Yes, the people who adamantly hate the policy are unhappy, but they were unappy already and nothing was going to change that.

This was a brilliant strategic move for Target and an excellent case study for other organizations who find themselves no longer in control of their story.

Your takeaway as a leader is to understand why this was Target’s only winning strategy or hire someone for social media who does. And it’s okay if this whole Facebook thing isn’t something you like dealing with it. This is your opportunity to put someone in place who can help your organization succeed on Facebook, Twitter, and all the rest of them. Because that’s increasingly the entry point to the Internet for many of your customers.

Man Poses as Target on Facebook, Trolls Haters of Its Gender-Neutral Move With Epic Replies