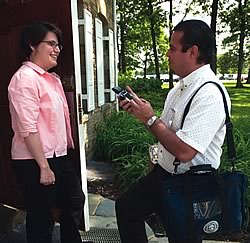 All businesses regardless of size can benefit from appropriate market research. Managers often examine the hard science used to ensure statistically valid samples. With a decent formula and spreadsheets surrounding them, comfort in the data’s accuracy is not a leap of faith.

Unfortunately, businesses often ignore or don’t heed the ART involved in good market research.  Even huge companies miss sometimes which is why a CNN.com poll less than 24 hours before the first 2008 Presidential  election ballots were cast was especially disheartening to see.

The question asked the already biased group of CNN.com visitors “How long are you willing to stand in line to vote?”  The offered answers were 2, 4 or 6 hours and “as long as it takes”.

There are many issues wrong with this poll.  Allowing for the fact that CNN would disclaim the poll’s accuracy by stating that respondents were strictly drawn from a poll of CNN.com visitors, the answers were truly horrible.  The minimum amount of time a respondent could answer was 2 hours. A Fairfax County (VA) election board official told me today to expect 2 hour waits at a minimum throughout the day and longer during non-traditional business hours.

Luckily, I’ll show up around 10:30 and hopefully finish by 12:30 if his projection is correct. But what about the CNN.com visitor who is unwilling to wait at all or for a period shorter than 2 hours?  How does that person answer this poll, and what will CNN do with these tainted results?

A good 8 hours after the poll was on CNN’s front page, Jack Cafferty’s story on anticipated voting delays doesn’t mention the poll, but does have 600 comments.   Good for him in not falling prey to the biased question and answer.

I was set to spike this blog and not bring the issue up until I backed out of CNN.com and saw the current poll.   “Did you vote early?” was the question running below a story showing exactly how many people had voted early by state and party affiliation.  Interesting data to know if you are CNN’s advertising team and pointless for any other reason.

As for the first poll, the best researchers I know try their hardest and are trained in not leading the respondent.  While this was an especially vivid example, unless you have that type of training, you may want to consult an expert before writing your own poll.  Simply having software and an audience isn’t enough to guarantee meaningful results. Be nice to each other if you’re in a long line tomorrow.