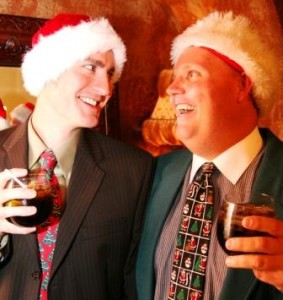 I wrote two years ago about productivity on pseudo-holidays, those days surrounding a holiday.  I call them CEO holidays because they’re days when the boss gets to be Santa CEO and declare an unofficial holiday.  They’re the kind of day where folks aimlessly wander around before a long weekend.

Thanksgiving and Christmas, often four day holidays, are often the worst. Can we leave early today? After so many requests, sometimes even from senior managers, the CEO declares a CEO pseudo-holiday. “We’ll be closing today at 2 p.m. in observance of the holiday.” (Err, you mean the one starting in two days?  And we’re leaving early today?)

I experienced something like that in reverse this month in a small business group at the local Chamber of Commerce. This business networking group exists for one reason–to help small businesses make more money through referrals, recommendations and learning about the capabilities of the individual members. The group meets on Tuesdays and the next meeting is  November 23.  For those of you keeping score at home, that’s two days before Thanksgiving.  Two people mentioned that when the meeting was first announced and the rest of the group looked at them and muttered variations of the phrase, “So what?” I was reminded of a time two years ago when I snuck online early Thanksgiving morning and someone asked me in Twitter what entrepreneurs call  Thanksgiving. The answer:  Thursday.

Contrast that with a meeting I once had with some government folks.  I was eager to help with a project which a Deputy Chief of Something or Other assured me was the “agency’s top priority”.  We quickly agreed that the agency head should address an all-hands meeting. Used to web speed, indeed one of the reasons they asked for my help, I began looking for open slots over the next 48 hours. No, no… I’ll have to check his calendar. Well, sure, but let’s put together two or three times, I suggested.  Then you check the calendar, confirm the time and away we go. It’s not that easy. Well, what’s so hard about it?  Okay, fine, I responded to some withering looks.  Check your calendar and let me know.

This critical kickoff meeting, the one that this government agency said was the most important initiative in the entire agency, took place 17 days later.   For those of you still scoring at home, that’s 4.5% of a YEAR. There is a balance between CEO pseudo holidays, an entrepreneur working Thanksgiving morning and a government agency waiting a half-month before kicking off their “most important” initiative. Finding that balance will help you keep your wits about you over the next 7 weeks of festivities. Happy Thanksgiving.