Being overwhelmed by new technology isn’t unique to our time according to writings from those alive when cars took over from horses and television from radio.

Each development brings new, faster capabilities to our society, and some industry insiders believe that society hasn’t created mores and coping mechanisms to handle those changes. The Atlantic has a fantastic feature on the hate-filled messages Instagram users are receiving–the famous and not famous.

Some report death threats. Others report non stop telephone harassment and even “swatting”, which occurs when someone makes a fake distress call about active shooters at a person’s home. The name derives from the SWAT units police send to those calls. The fact that a nickname for this aberrant behavior exists shows its prevalence.

Those users aren’t alone. Environmentalist Bill McKibben wrote a New York Times op-ed Saturday that included these chilling sentences, “I was used to social media abuse. Then someone suggested shooting me.” McKibben makes a request that should be a low hurdle for most people: “Let’s stop threatening to kill each other.”

Politics also causes tech depression. A new study called “Hidden Tribes” suggests that liberal activists make up about 8% of the U.S. population while another 25% are traditional or devoted conservatives. The study calls the remaining 67% “the Exhausted Majority”, and its authors suggest that much of the battle among the politically engaged happens online. Here’s a download link to the PDF.

Foreign propaganda targeting U.S. voters is also taking a toll on frazzled nerves. We learned this week about a treasure trove of 10 million messages sent as part of an Iranian disinformation campaign targeting Americans. Facebook and Twitter each deleted hundreds of accounts for political spam and misinformation. Executives at major online platforms express concern that these activities by foreign governments are being copied–and misused–domestically.

Data privacy is another cause of dissatisfaction and tech avoidance. We constantly learn about new breaches as more of our lives become downloadable instead of being squirreled away in private corporate databases. Reports surfaced this weekend about data breaches at a network of 8 adult websites. Among the reported haul were the IP addresses of how people connected to the sites and 1.2 million email addresses. Oh, and the content that they shared–text or pictures–on those sites.

That was a breach, but problems with data security bedevil many companies. TechCrunch reported early in the week that Donald Daters–a website for Trump supporters looking for love–leaked its entire user database. An unaffiliated French security researcher downloaded everything including private messages and access tokens, the same type of data breached on Facebook earlier this month.

No comprehensive solutions exist for these problems. Researchers at Penn announced a preliminary study that suggests semantic analysis–studying the words we use online–can detect depression early. The work is promising and interesting, but still unproven and using only an urban audience that opted in to the study. Their results are here.

Until then, you can take some measures. We’ve told you before about the Center for Humane Technology led by Tristan Harris, a former Google ethicist. They’ve got links to apps that can help you and some great suggestions about ways to make tech time well spent.

Creating net neutrality protections was a multiyear battle.  Restoring them looks to be just as tricky despite efforts in California, Vermont, and other states.

The New York Attorney General’s office has widened its probe regarding the comment process at the FCC after finding that as many as 2 million comments were filed in people’s names without their knowledge.

That number is now nearly 10 million according to the AG’s office, which issued a flurry of subpoenas to entities opposing net neutrality. Separately, a Stanford study says that 99.7% of commenters who weren’t part of an automated campaign opposed net neutrality’s repeal. ArsTechnica remains a great source of information about this critical issue.

Ars also has coverage about Comcast’s October 3rd court filing in California that described the company’s potential for lost revenue under net neutrality. Here’s that filing.  One notable line: “The loss in revenues and other monetary damages that the law will cause to Comcast will also be significant and are difficult to calculate.”

Take a look at this Netflix screen capture tweeted by writer and audio producer Stacia Brown. 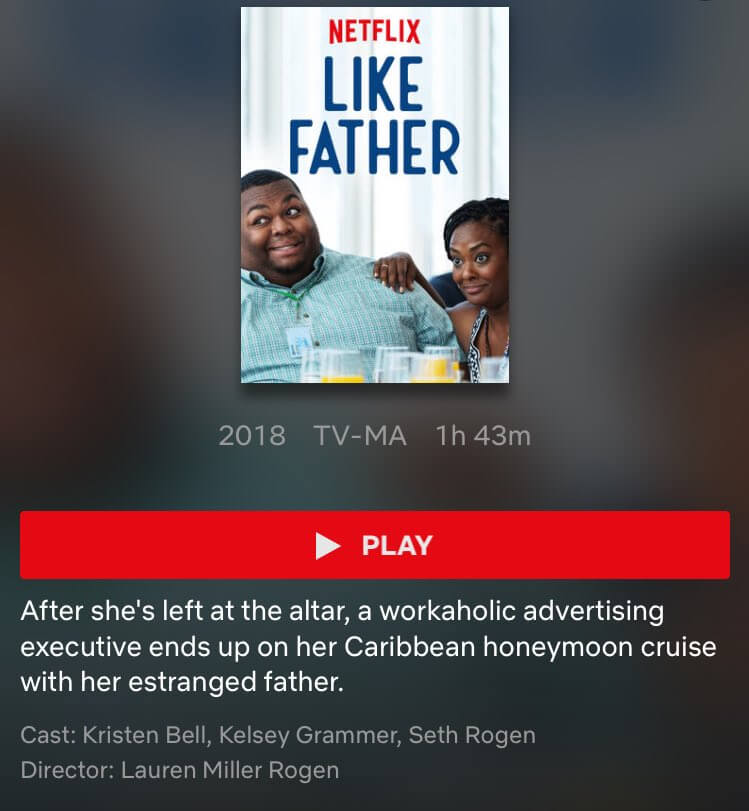 As Stacia points out, the movie’s cast is listed as Kristen Bell, Kelsey Grammer, and Seth Rogen, none of whom are shown in this image.

Remember that a Netflix exec was fired early this year for using racial slurs. The company hired a new VP for Inclusion Strategy this summer, and this is a big test for the company.

Netflix has issued a statement that says only a user’s viewing history dictates what image is used to promote a show or movie. That seems like a smart idea when you flip through photo galleries showing romantic scenes or action scenes from the same movie based on what a viewer chooses to watch.

The issue isn’t whether Netflix is practicing racism. The issue is that an executive said dumb, hateful things that put the company in a bad light. And while showing one of several customized posters based on viewing habits might even increase overall viewership, having someone more sensitive to diversity issues in the graphics creation process would have been smart.

If nothing else, Netflix misses in setting expectations by showing two people of color on the poster without them having a significant role in the movie. I watched the 2 minute trailer. The man appeared, but didn’t speak, for under three seconds. Neither the man nor the woman’s name appear in the movie trailer.

Being able to segment people and market to the highest degree of specificity is an awesome capability. Doing so without a lot of hard thinking about the audience’s reactions from many points of view is bad business.